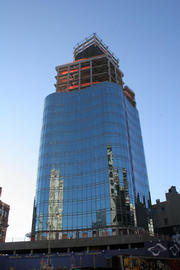 With the facade of Gwathmey's "Sculpture of Living" almost complete, I thought it was about time I posted another update on the changing face of the East Village. Though the morning light reflects nicely off of its undulating form, I can't help but worry about all of the neighbors who will be blinded by said light shining into their windows, or the tourists who will all of a sudden think that they're in gaudy midtown. That said, I've seen uglier buildings. But that's about all I'll say.